Puzzle No 132: At least once Diagonal

Puzzle idea is from Ramesh. I kind of liked the idea and so attempted to create one sudoku of it. I have focused more on the theme rather than difficulty but I hope you will still enjoy it.

Place numbers in the grid such that each row, column, and 3*3 box contain the numbers 1-9. Additionally, digits outside the grid and adjacent to the arrow lies at least once in the cells pointed by that arrow. 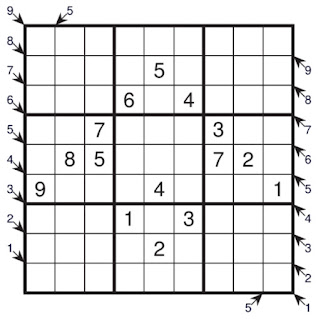 Posted by swaroop guggilam at 1:20 AM

Labels: At Least Once Diagonal, Medium

swaroop guggilam
Mumbai, Maharashtra, India
The world of PUZZLES is a fantastic place to be in. I am pursuing Ph.D. in Electrical Engineering at University of Minnesota -Twin Cities (USA). Started solving puzzles in 2010. Also love to create it.

Copyright © 2010 Swaroop Guggilam Puzzles. Any Commercial use will require written permission from Author.