While doing the Yajilin Yacht Contest on Logic Masters India, I got this idea. Yajilin Yacht is a ongoing Daily Puzzle Series contest by IHNN (Jeffrey Bardon) , highly recommend to check it out if you haven't already.

It took a while to get this working, but I am very happy with it. I promise no bashing is required, there is an interesting hard step that opens the puzzle.

Rules: Shade some white cells and then draw a single closed loop (without intersections or crossings) through all remaining white cells. Shaded cells cannot share an edge with each other. Some cells are outlined and in gray and cannot be part of the loop. Numbered arrows in such cells indicate the total number of Shaded cells that exist in that direction in the grid. 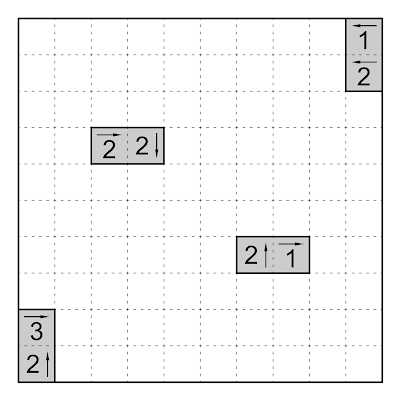 Have Fun!
Posted by swaroop guggilam at 1:27 PM 1 comment:

Rules: Every region contains exactly two black cells. Each black cell must be a part of a 2 x 1 or 1 x 2 block (domino), irrespective of the region borders. No two dominoes may share an edge. Black blocks can touch each other diagonally. 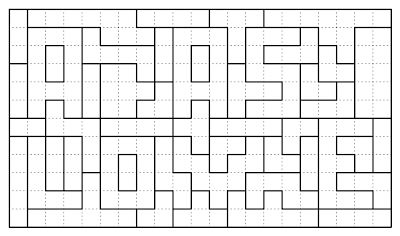 Posted by swaroop guggilam at 6:12 PM No comments:

Rules: Place numbers in the grid such that each row, column, and 3*3 box contain the numbers 1-9. Additionally, orthogonally adjacent cells must not contain consecutive digits. 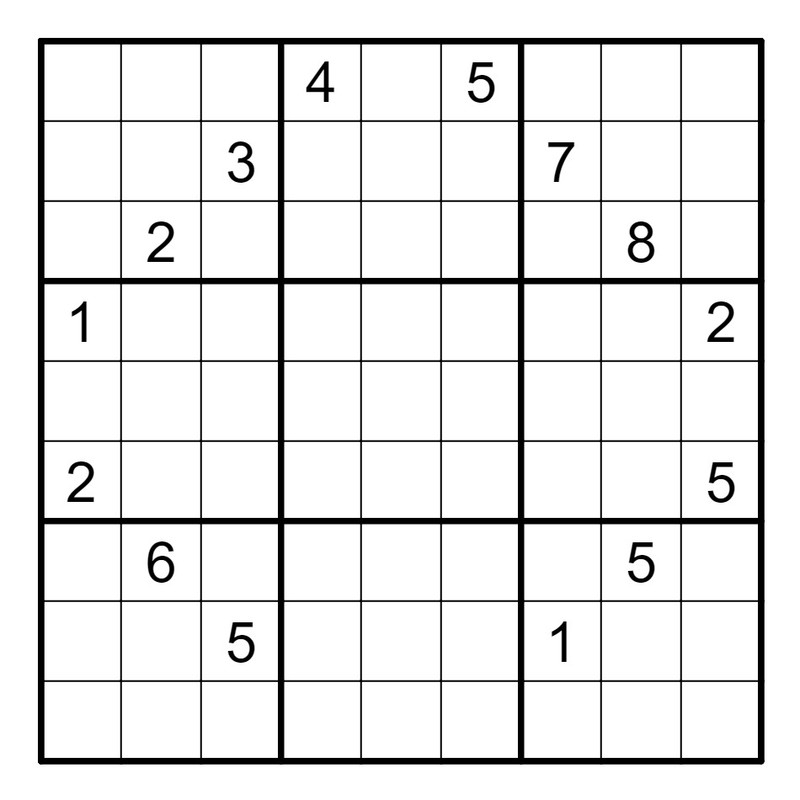 Posted by swaroop guggilam at 1:08 AM 2 comments:

This Puzzle was created during the speed setting contest over Cracking The Cryptic discord server within a time limit of 60 min. The contest was "Statues in the Twilight Zone".

The goal was to create a Statue Park puzzle with an added Twilight twist (Rules explained below).

A bank of shapes is given with the grid, usually with each shape labeled for your convenience. Place each of the shapes exactly once into the grid, with rotations and reflections allowed. No two shapes can overlap or be orthogonally adjacent, and all of the space not occupied by shapes must be connected. Black circles in the grid represent spaces that must be contained in one of the shapes, and white circles represent spaces that may not be contained in a shape.

Additionally, The number clues act as minesweeper clues (i.e. clues addressing the neighboring 8 cells) i.e. if there is a number in a white circle it gives the number of black circles around it. 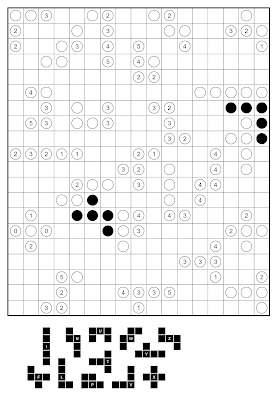 A Micro Puzzle to test out a new concept.

Later, Eric suggested, it can also be called Square Nurikabe by giving clues square way. Since the original idea struck me as Square root, I have left it as-is for this puzzle but may change the name in the future.

Shade some blank cells so that the grid is divided into white regions. Each white region contains exactly one numbered cell and has the same area as the number. Two white regions may only touch each other diagonally. All shaded cells are connected to each other horizontally or vertically. Shaded cells do not form 2X2 squares.

Additionally, each clue behave as given or it can be replaced with the square root of its value 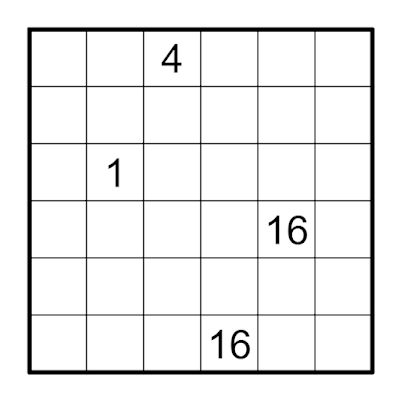 Posted by swaroop guggilam at 10:00 PM No comments:

A Micro Puzzle for Fun.

A circle at a corner implies that one digit is the sum of the remaining three digits at that corner. Not all possible circles are given. 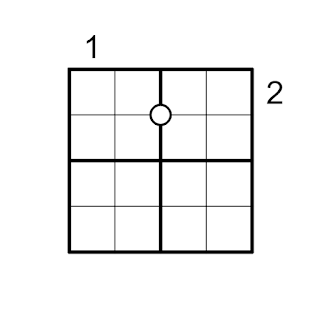 Posted by swaroop guggilam at 9:48 PM No comments:

This Puzzle was created during the speed setting contest over Cracking The Cryptic discord server within a time limit of 60 + (30 extended) min.

The goal was to add our own rules to the pre-defined ruleset (Necklace Rules) and create a puzzle within the time limit. Almost at the end had a unique-ness issue and had to place an unsymmetric clue to resolve it but overall happy with the puzzle.

1) Shade some cells in the grid such that all shaded cells form one orthogonally connected region, and no 2x2 region is completely shaded.

2) Draw an orthogonally connected, nonintersecting loop through some cells in the grid such that the loop path alternates between shaded and unshaded cells (i.e. before and after every shaded cell on the loop is an unshaded cell and vice versa).

3) Number of turns in each region must be the same and is to be determined by the solver.

4) Loop can pass through Number cells but Numbers cannot be Shaded.

6) Loop must pass through given circles. 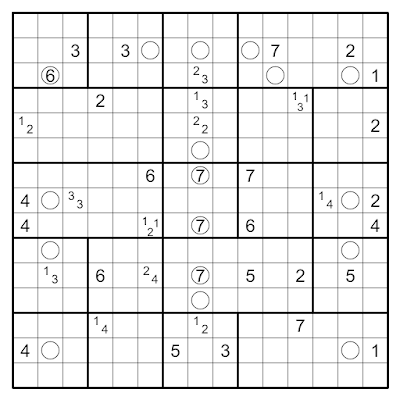 Posted by swaroop guggilam at 10:24 PM No comments:

This Puzzle was created during the speed setting contest over Cracking The Cryptic discord server within a time limit of 45 min. 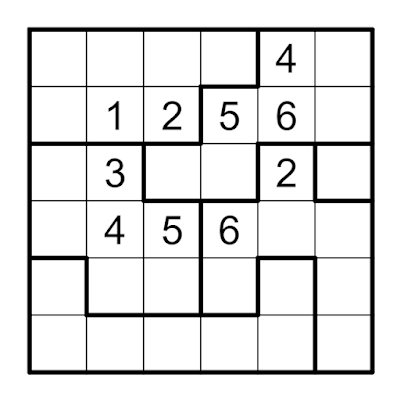 Posted by swaroop guggilam at 2:03 AM 2 comments:

swaroop guggilam
Mumbai, Maharashtra, India
The world of PUZZLES is a fantastic place to be in. Started solving puzzles in 2010. Also, love to create it.